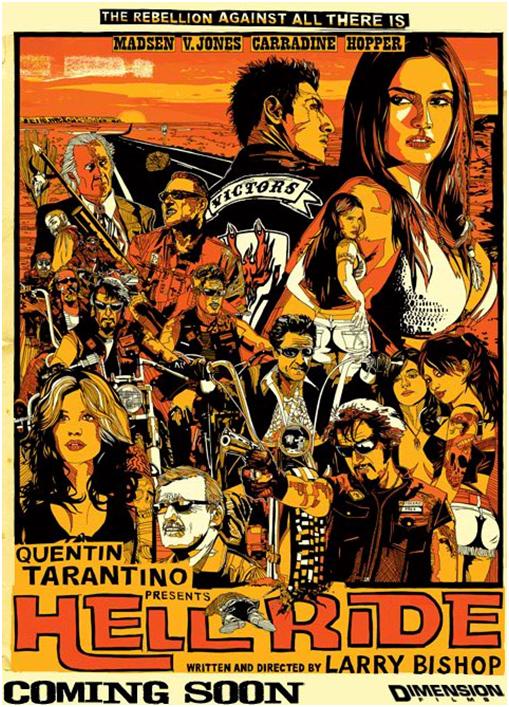 “Hey, what do those white wings mean?”

This probably isn’t the movie for you. But I sure as shit love it. This is the ultimate Grindhouse film. It’s about a couple of bikers that have unfinished business with a group of other bikers. There aren’t any good guys, they’re all really bad men.

Larry Bishop (son of Rat Pack alum Joey Bishop) stared in a slew of B movie biker flicks like “The Savage Seven”, “Angel Unchained” and “Chrome and Hot Leather” and then his career as an actor pretty much died. He wrote a few screenplays and directed a movie in the 90’s but he never circled back into the business. It wasn’t until he met Quentin Tarantino who offered him the role of Larry in “Kill Bill”, to have Bishop write, star and direct a biker film, and of course QT would produce it. Go figure. 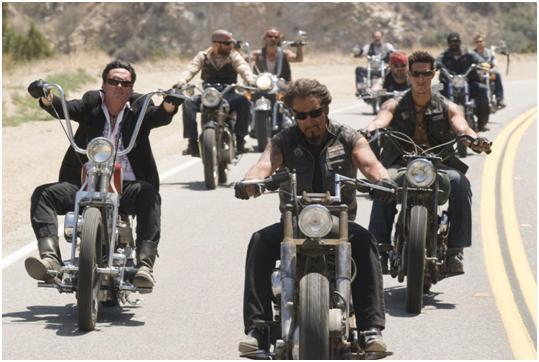 “Hell Ride” is a brutally graphic film that stars Larry Bishop as Pistolero the head of the Victors biker gang, whose right hand man is The Gent (Michael Madsen) followed by the new kid Comanche (Eric Balfour). They are on a mission to settle an old score with The Deuce (David Carradine) who is the leader of the rival biker gang and his right hand man is the crossbow wielding Billy Wings (Vinnie Jones).

I can’t believe this film is rated R. This has to be one of the most graphic films when it comes to language, violence, nudity and adult content. It is insane. The opening scene is a flashback to the 70’s where Pistolero’s one time fling is sitting naked in a chair, gets her throat slit and than gasoline is poured on her and she’s lit on fire. The movie gets even more graphic, and even more intense. Be warned because this probably isn’t the movie for you. 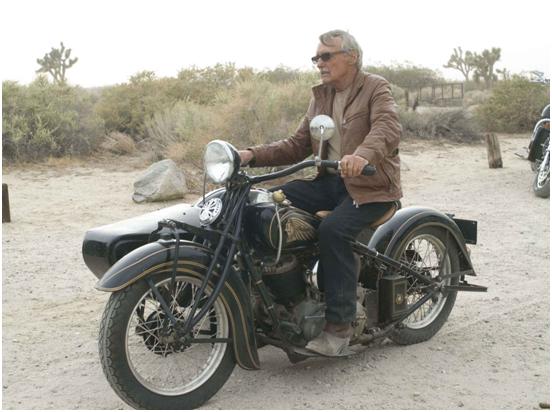 But if it is; you’re going to love it. Most people who have seen this film are outraged by it – they can’t believe anyone would ever want to watch such a thing! How horrible! Give me a fucking break – it’s a genre film. This is what it is supposed to be. It’s supposed to have bad dialogue, cheesy acting, nudity and graphic violence. It’s supposed to be rough and bad – just like “Machete”.

The films core cast is wonderful. Larry Bishop is great – he’s just so over-the-top that he’s the man. His performance is stiff, he snarls his lines and you can’t help but think, “man this guy is an awful actor!” No he’s not. He is playing the role the way it should be played. Michael Madsen is badass because he’s Michael Madsen on an ape hanger motorcycle; and because he’s Michael Madsen. Dennis Hopper is always good, and he’s even better in this because he’s on a motorcycle once again, but this time he’s got a sidecar that’s filled with machine guns. Way cool.

David Carradine really doesn’t have much to do in the film, other than be completely menacing as the evil villain. Carradine was so cool and his role as The Deuce is no exception. Vinnie Jones plays The Deuce’s right hand man, and I’ll be honest here: this is the only film that I’ve ever really, really, really liked Jones in. He’s fucking awesome in this movie! I mean, the guy has different colored wings tattooed all over himself, and the graphic quote from the top of this post explains what the wings represent. He also carries around a crossbow and fucks some bitches up with it.

This film is the best Grindhouse film because it was made by a filmmaker who lived that era, who starred in those films. Tarantino and Robert Rodriguez’s career have been built upon the crappy films that people like Sid Haig and Larry Bishop made in the 60’s and 70’s. Bishop was the one guy who had experienced this hands on, and who made a near perfect film. 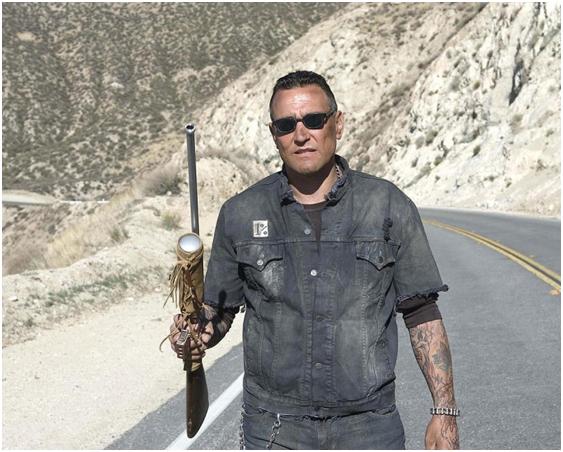 The fact Bishop cast himself as the lead, yet doesn’t give himself billing is pretty slick. He uses pulp icons David Carradine and Dennis Hopper, and then uses their contemporaries via Michael Madsen and Vinnie Jones. For as trashy as this film is, Bishop made it with incredible smarts and skill that leaves me wanting a hell of a lot more Bishop.

This film was everything I wanted it to be and more. The poster for this film is phenomenal and so are the cast and the score and the way the film is shot. Its runtime is 84 minutes which is perfect for what this film is: trashy, graphic and poor taste. “Hell Ride” is nothing less than fucking excellent. But then again; this probably isn’t the movie for you.

Also: all the bikes the actors ride in the film are their own personal motorcycles. That’s pretty cool if you ask me. 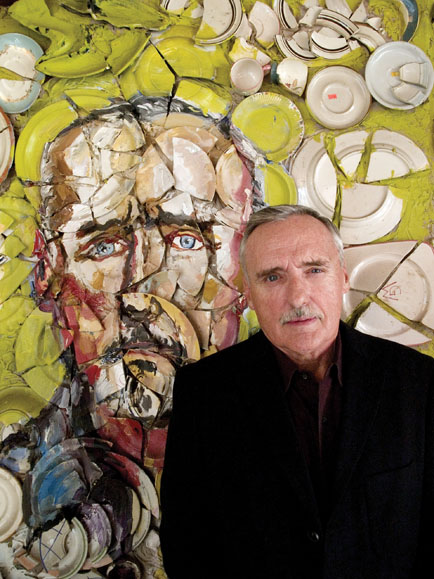 A man who acted with John Wayne and James Dean – to Leatherface’s hunter – to pure evil in the eyes of David Lynch to pulling on our heart strings in “Hoosiers”.
This man is an accidental genius and one of the most important figures of cinema history – anyone who disagrees is a fucking idiot.

You will be missed Mr. Hopper.

Expect a full review soon.  Whenever I think of David Lynch’s “Blue Velvet” the scene that comes to mind is Dean Stockwell with a work light as a microphone mouthing the words to Roy Orbison’s “In Dreams”.  It is truly one of the most haunting scenes in film history as Stockwell floats around the screen and Dennis Hopper lets his psychopathic rage bubble up. 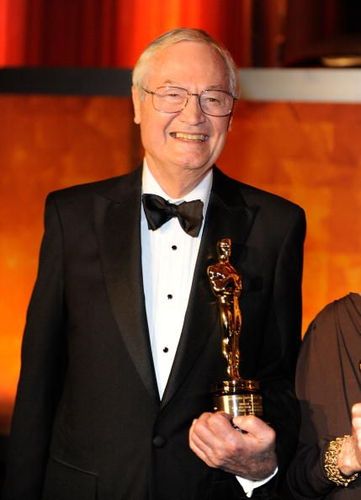 “I’ve never made the film I wanted to make. No matter what happens, it never turns out exactly as I hoped.”

I was so pleased when it was announced that Roger Corman was awarded the Academy’s Life Time Achievement award. There are still others that are just as deserving: Stanley Kubrick, Peter Sellers, Sergio Leone, David Lynch (although her has time for a long overdue Oscar), the list can go on and on. Roger Corman picked up where Ed Wood left off, making nothing but B Movies. His filmography is filled with bizzaro titles and a bunch of lame movies but Roger Corman is responsible for the birth of the greatest generation of filmmakers. He was the only producer who would give people a chance to make films as long as they would stay within his extremely low budget. Corman directed a few films, most of them were mediocre cult films, but he does have a masterpiece, “St. Valentines Day Massacre” (1967) starring Ralph Meeker as Bugsy Malone and Jason Robards as Al Capone. The film also co-stars George Segal as Peter Gusenberg and two small parts for Corman players Jack Nicholson and Bruce Dern. Corman also directed “The Trip” staring Peter Fonda, Bruce Dern, Dennis Hopper and it was written by Jack Nicholson. The film is essential about a group of people who embark on an acid trip. Corman reportedly took LSD along with Dern, Hopper, Fonda and Nicholson to “get the effect” of the film he was making. How cool is that? Corman is responsible for the careers of: Francis Ford Coppola, George Lucas, Jonathon Demme, Bruce Dern, Jack Nicholson, Peter Bogdonavitch, Ron Howard, John Sayles, Peter Fonda, Dennis Hopper, James Cameron and Martin Scorsese. How impressive is that? Corman has had cameo appearances in “The Godfather, Part II”, Ron Howard’s “Apollo 13” and in every film Jonathon Demme has made.  I love how the filmmakers he gave a chance too, never forgot about him and still to this day pay much homage, and give him much credit.  This is a man who was notorious for shooting films as cheap as possible, and in the shortest amount of time. Corman remains bedrock of the 1960’s and 1970’s and was the father of the greatest generation of filmmakers. There is an excellent Corman Boxset you can get, and I would strongly advise the serious movie watcher to invest in it.