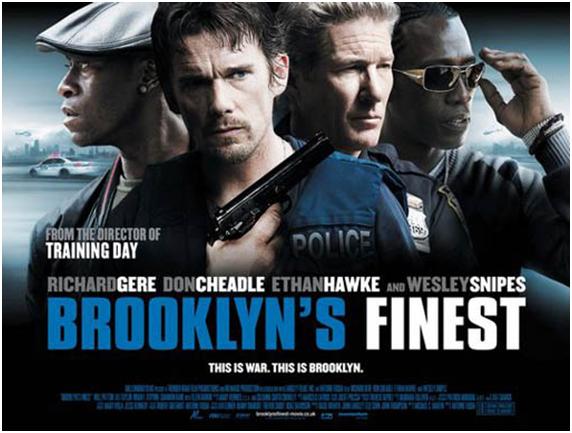 “Sal, no matter what you have done, God is ready to forgive you.”

“I don’t need his forgiveness Father, I need his fucking help!”

“Brooklyn’s Finest” is the story of three police officers: Sal (Ethan Hawke) who is a narcotics officer who steals drug money from raids so he can put a down payment on a new house so he can give his three children and his wife (Lili Taylor) a better life. Sal’s wife is being affected by wood mold in his older home, she’s pregnant and they’re twins. Sal steals money from bad people to provide.

Tango (Don Cheadle) is a cop who is deep undercover. He spent time in jail, and while there befriended Caz (Wesley Snipes) who saved Tango from being shanked in prison. In return Tango turned Caz on to a different lawyer who got Caz out of jail on an appeal. Tango periodically meets with his supervisor Bill Hobarts (Will Patton), and Tango begs for him to get him out from undercover. Tango is losing himself inside the world of crime. 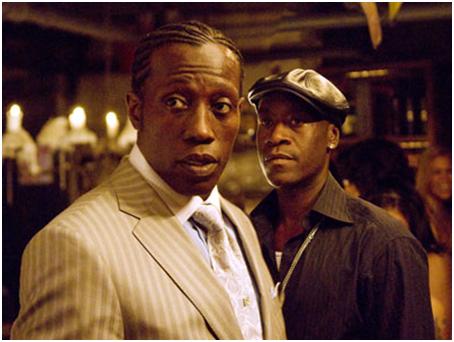 Eddie (Richard Gere) is a burnt out, apathetic patrolman who is seven days away from retiring. He’s empty and lonely. His wife has separated from him and he periodically pays a young hooker for sex. Eddie counts down the days and turns a blind eye to everything he sees so he can survive.

This is a fine film; director Antoine Fuqua (“Training Day”, “King Arthur”) has matured so much as a filmmaker. Not to say that “Training Day” is an immature film – but this film is a display of how Fuqua has become a truly engaging storyteller, and he shows a lot of homage to other filmmakers. While watching this film, at times it felt like a Paul Thomas Anderson film, than a Scorsese film, than a Tarantino film.

These characters are well written, and the dialogue is very well paced. This film could have been a bitterly abysmal cliché cop film coming from first time writer Michael C. Martin. The film has all the elements of a cop film: redemption, retribution, guilt, greed, loneliness – all these emotions are apparent and forthcoming – yet it’s the performances that truly make the film worth seeing.

I’ve never been a fan of Ethan Hawke, I always through he was a little overblown and haven’t really liked him in much of anything. As Sal – I found a place in my heart for him, the feebleness and weakness that he displays the mission to steal as much money as he can so he can buy a new house for his family. Yes, we know it’s wrong – but if you wife was being badly affected by wood mold in your house, and it was treating the life of the twins she was carrying – would you do the same thing?

The Cheadle/Snipes story arc left me a little flat, it’s interesting and fun to watch Snipes back on the big screen, but I found myself at times getting a little bored with this arc. Will Patton has long been one of my favorite character actors, and I wish Fuqua would have used him a little more – Patton is just kind of there. Ellen Barkin who hasn’t really aged very well, shows up as an FBI agent working Cheadle to turn Snipes in, to even plant evidence. Cheadle won’t do it and leads a pretty great scene between Barkin and Cheadle.

I first saw the unrated promo trailer for this film about a year ago, and the opening to the promo trailer was the introduction of Richard Gere. His character introduction is one of the best character introductions I’ve seen. Gere really brings his A game here, and it seemed to surprise people. Richard Gere is a tremendously talented actor see “Internal Affairs”, “I’m Not There”, “The Hoax”, “Chicago”, “Unfaithful”, Gere has made really, really good films and laid down some excellent performances. This almost, just almost triumphs Gere’s most engaging cameo in HBO’s film, “And the Band Played On” about the AIDS epidemic in the 1980’s. 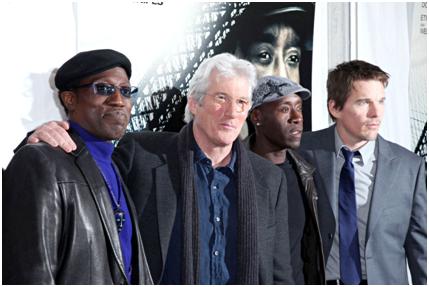 As Eddie, Gere really takes a step outside his conventional and even nonconventional roles. As Eddie, we see a side of Gere that we haven’t really seen before, we see him do things in the film that surprised me. Richard Gere deserves his long awaited Oscar nomination as Best Supporting Actor for his role as Eddie in “Brooklyn’s Finest”.

What makes this film really good, I mean really good is the fact that these three separate stories could all be their own film. The stories for each are all so interesting, and I think the issue with the Cheadle/Snipes arc was that it wasn’t developed enough. But Hawke and Gere’s stories are heart breaking and sad.

There is a wonderful shot towards the climax of the film where it is one long shot that shows each of these characters crossing paths to the climactic ending of their stories: revenge, retribution and absolution. Fuqua makes a tremendously effective film that if it were finer tuned and crafted, it could be a masterpiece.