I’ve had a love affair with Joe Carnahan’s films. Like most love affairs, it’s been off and on. His film “Narc” is one of the best that the “cop on the edge” genre has to offer. “Smokin’ Aces” let me down, though the visual style wet my beak enough to keep me engaged, to keep me wanting more Carnahan. “The A-Team” was his Hollywood film that garnered enough success for him to make his boldest and most commanding film to date, “The Grey”.

Liam Neeson, who has become the world’s most bona fide badass due to his juggernaut of a performance in “Taken”, headlines the cast of eclectic character actors who portray a group of rough necks whose plane crashes in the frozen Alaska wilderness and are being hunted by a pack of wolves. Fuck yes. 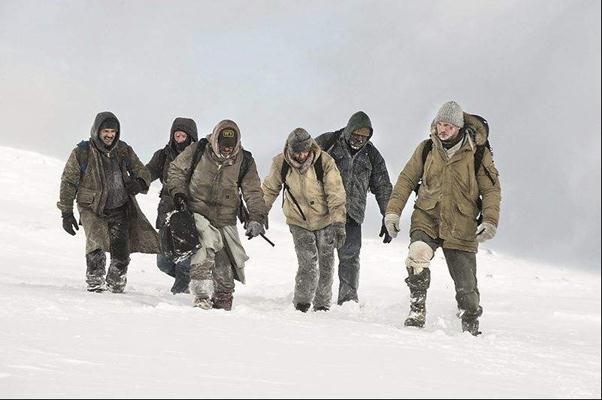 Neeson has made a remarkable transition from young European thespian to the mentor figure, to a 59 year old action hero. What sets Neeson apart from the flock of action stars that have migrated into making the “Expendables” films is he’s a truly remarkable actor who now fuses his talent with action. This allows him to breathe the proper amount of life and depth into each action oriented character he plays.

Joe Carnahan delivered Neeson a wickedly great, suspense AND drama filled screenplay that goes beyond the man versus wolf dimension the TV spots and advertisements lead you to believe. The film is more in tune with man versus nature, but really boils down to man versus self.

The entire first act of this film deals with Neeson, named Ottway which sounds like a name that was written for Lee Marvin, writing and reflecting on a letter to his (former?) wife. The longing, the pining, to see his wife again, to touch her is heartbreakingly conveyed in Neeson’s voice, the expression he carries in his face that does more acting than most actors can do in an entire film.

I can’t help but think that Neeson drew from his own personal experience of his wife, Natasha Richardson’s, untimely death. Ottway searches for a reason to live, until he finds himself amidst a plane wreck where he assumes the role of leader.

The men are hunted by a pack of wolves, and leave the crash site to try and escape the hunting radius that the wolves patrol. Ottway finds himself in a position of survival, and he must defeat his own demons while fighting back against nature and himself to try and conquer it all.

Yes the film does become predictable, and you can foresee the men getting picked off by the wolves, one by one. But the ace that Carnahan holds up his sleeve is his brilliant ending that garnished boos, and “what the fuck!?” when the credits began to roll. I won’t spoil how the film ends, but it has resonated with me since I saw the film a week ago, and has given me such an inner passion for this film, that I can’t wait to see it again.

Oh, and just one last thing; stay through the credits because there is one last scene. I, myself, missed it. After reading about it, I really wish I had seen it.