“If you don’t stand for something, you’ll fall for anything.” – The Wise Man (Scott Glenn)

Zack Snyder’s latest (and original) film “Sucker Punch” has met critics with a lot of poor reviews and was beat in the box office by that “Whimpy Kid” movie. There are things I will never understand, and I’ve accepted the fact that I’ll never fully understand them. Why are did all the Little Ceasar’s pull out of K-Mart. Why do you need to keep bamboo out of direct sunlight when in nature, it exists in direct sunlight, and if there is a God – why would he/she create something like Sarah Palin?

All these questions seem to have the same answer as to why critics hated “Sucker Punch”. I’m not quite sure what the answer exactly is, but all I know is that “Sucker Punch” is a pretty damn good movie with mind blowing visuals.

Is this film as epic as Snyder’s previous film “Watchmen”? Absolutely not. This film is disjointed and a little incoherent, which I think it’s supposed to be. There are five girls lead by Baby Doll (Browning), Sweet Pea (Cornish), Rocket (Malone), Blondie (Hudgen) and Amber (Chung) who are trying to escape a mental institution that’s run by the evil Blue Jones (Oscar Isaac).

As Baby Doll escapes into her mind with the other girls, they are mentored by The Wise Man (Scott Glenn). The Wise Man tells Baby Doll that she needs to retain five items in order to successfully escape from the asylum.

Each time Baby Doll enters her dream sequence – she and her posse of badass chicks kick the shit out of whatever monsters/beasts lie in their path to achieve the item to escape. They need to act fast, because the High Roller is only three days away from his visit to lobotomize Baby Doll.

The group of girls are fine in the film. They serve the purpose that they were designed for – to look good and kick ass. None of them are distracting with poor acting skills, they play off one another well. 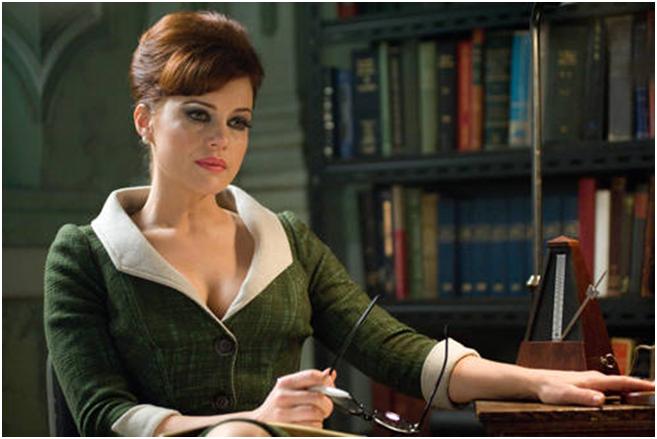 What really bridges the film between its fantasy dream sequences and its stylization are the strong performances by the “heavies”. I have never really cared for Carla Gugino. I always resented the fact that she was just packed into a movie because she’s good looking and not afraid to take her clothes off. I was won over by her in “Watchmen” and this past season of “Californication” – and in “Sucker Punch” I thought she did a pretty damn good job. Her character is mysterious enough to where you can’t decide if she’s helping the girls or just another trap for them to get stuck in.

Oscar Isaac plays a pretty damn good bad guy. I haven’t seen him in anything prior to this film, so it was a treat for me to experience him for the first time. He’s very seedy, and very filthy – he seems like a character that should be one of Harvey Ketiel’s underlings in “Taxi Driver”.

I absolutely love the fact that Jon Hamm is in this film. To me, Jon Hamm very much has the look of a silver screen icon (which is probably due to the fact that he’s the star of “Mad Men”). He’s handsomely mysterious like Bogart was. His limited role in this film doesn’t show off any acting chops, but instead offers a small treat to seeing Hamm play a bad guy in a way cool movie. The one thing that I think is very, very interesting is his reaction shot towards the end of the film. If you see the film, you’ll know what I’m talking about.

Scott Glenn is my biggest mancrush. Nough said. His character seems to be the perfect character for Liam Neeson to play, you know, the mentor. But since Neeson hit it big with “Taken”, he gets his own vehicles now. Glenn is cool in the film. He’s just that old badass who helps these girls wreak more havoc then you could possible imagine in this film. Glenn anchors the film.

I liked this movie very much, and I am surprised at the harsh reception and its underwhelming box office production. This may not be as good as I had hoped for. That being said, this movie really does kick ass.