I’ve been exposed to John Wayne more than most of my generation. My Dad is obsessed with John Wayne, and I grew up watching “The Searchers”, “Red River”, “The Man Who Shot Liberty Valence”, “Fort Apache”, “She Wore a Yellow Ribbon”, “The Shootist”, “Rio Grand” and “True Grit”. “True Grit” was the film Wayne won his sole Best Actor Oscar, creating much fuss since Jon Voight and Dustin Hoffman were both nominated for “Midnight Cowboy”.

Anyone who considers “True Grit” a classic Wayne film is an idiot. The original “True Grit” is a bad film. Wayne is solid in it (though he did not deserve his Oscar for that film – it was a “career” Oscar). The supporting players of Glen Campbell who plays La Boeuf (Matt Damon in the current film) and Kim Darby who plays Mattie (played by Hailee Steifeld in the new film) are fucking terrible. So terrible they ruin the movie. The original is just a terrible, terrible film.

The new version of “True Grit” by Joel and Ethan Coen is their new masterpiece. Jeff Bridges plays our U.S. Marshall Rooster Cogburn who is an alcoholic, shoot first and ask questions later bad ass. New comer Hailee Steinfeld plays Mattie Ross, whose father is killed by ranch hand Tom Chaney (Josh Brolin) and Mattie enlists Cogburn to track Chaney down, and bring him to justice.

Matt Damon plays Texas Ranger LaBoeuf who has been on Chaney’s trail all the way from Texas (the film takes plays in Arkansas). Together Mattie, LaBoeuf and Cogburn trek into apache territory to bring back Chaney who they believe is running with a gang of bandits lead by “Lucky” Ned Pepper (Barry Pepper).

The Coen Brothers deliver us another instant classic. They’ve flirted with making a western before, with their western noir films like “Raising Arizona”, “No Country for Old Men” and “Blood Simple”. This is a western that would have made John Ford and John Huston proud. This film stacks up against “Tombstone” and “Unforgiven” and is better than both of them, this film is great.

Aside from this seeming like a generic western, the Coen Brothers create this almost haunting “backwoods” western. It feels rough, looks rough – and isn’t very settling. It’s not a Hollywood western – it feels authentic.

Hailee Steinfeld is astounding in the film. She dominates the screen, and when she’s toe to toe with Bridges, or Damon, or Brolin – she holds her own, and holds her own well. She gives a command performance that needs to be recognized. She seems to be picking up steam in the Best Supporting Actress category, but she is the clear lead in the film. All the other characters are supporting to her because the story of “True Grit” is about Mattie, not Cogburn. She should really win Best Actress, but I doubt it’ll happen.

The role of Mattie Ross requires a performance of the highest caliber. She’s a strong and very independent girl. She is the heart and soul of the film. I almost think that this is a role that Ellen Page would have lobbied for really, really hard (if she did play the part of Mattie, it would make me hate such a perfect film).

Matt Damon gives a quality performance, and while it’s not his “best” performance it might just be my favorite. I like the fact that Damon is an A list star, and can pick and choose his roles – but he decided to take a backseat to Steinfeld and Bridges, that shows a plethora of character of Damon.

Barry Pepper portrays “Lucky” Ned Pepper, who Robert Duvall played in the original film. I’ve never liked when actors do impressions. Even when they play the same character in a franchise – notably DeNiro/Brando in the Godfather films, I think DeNiro made the role his own while showing homage to Brando – but I felt that Pepper does the best Robert Duvall impression I’ve ever seen, and he rocked the role.

Josh Brolin gives a standout backseat performance in this film, he’s such a remarkable actor. He gives a reserved and very surreal performance. He seems like a bumbling fool, but he hisses and sneers his lines of dialogue, its fun to watch. I can’t even believe that this is the same actor who played the “bad guy” in “Wall Street: Money Never Sleeps” which came out a couple of months ago. I don’t know if Brolin is a method actor, but whatever method he does use works, and works incredibly well.

As for Jeff Bridges…

Okay look, if you know me, or frequent my blog, you all know that I have a bias for Jeff Bridges. I think he’s an incredible actor and one of the finest actors ever. But, I don’t let my bias get in the way of my thought process. The Dude is not my favorite Bridges performance, and I don’t think he should have won for “Crazy Heart”, Colin Firth should have for “A Single Man”.

This really was a risky role for Bridges to take. First of all, he was playing a part that was made iconic by John Wayne, and the second was that he just got done playing a bloated over the hill cowboy in “Crazy Heart”. Not for one second does Bad Blake bleed into Rooster Cogburn. We watch Cogburn go through drunken stupors, sober up and even save the day. Bridges makes this role his own, with no help from anyone. Bridges is the fucking MAN!

The climactic shoot out at the end of the film literally had me tense and on the edge of my seat. I knew what was going to happen, I’d seen the original film many times, I knew what the story was, where it went and how it went, but I can’t tell you this enough, this film had sunken into me from the opening narration. 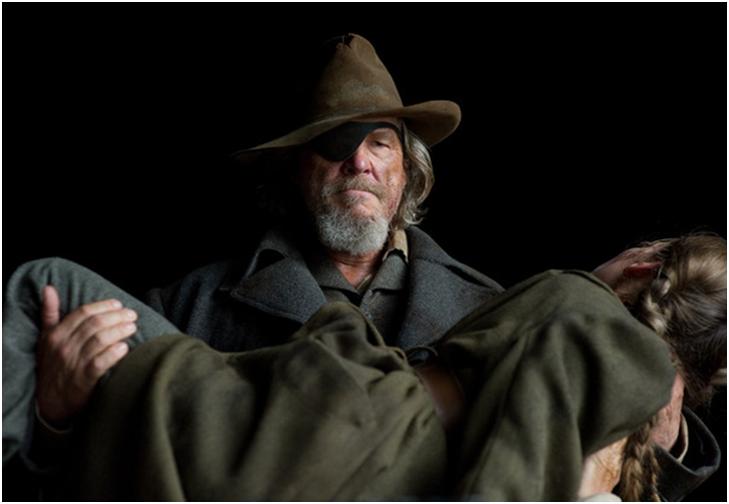