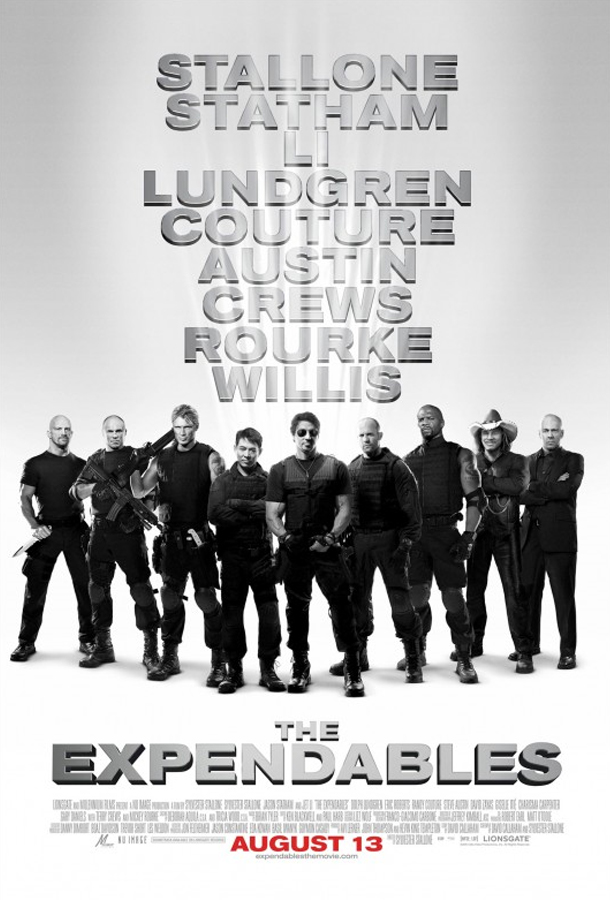 If you’re expecting a “thinking man’s blockbuster” – ala “Inception” – you’d better move on.  If you’re looking for an over-the-top ball buster of a kick-ass action movie with nothing but a bunch of older guys who look better than I do – than you’re in luck because “The Expendables” is a delight.

This is a film with a weak storyline, an almost absurd script and some shotty acting.  But what this film has to offer is an unstoppable action sequence at the climax of the film, a huge loud gun that Terry Crews carries, a wickedly fun over the top performance by Eric Roberts and landmark moment in cinema history where Stallone, Willis and Arnold all share camera time in the same scene.

The story is simple: a band of mercenaries called the Expendables are hired guns that go from job to job while kicking ass and taking names.  The Expendables are led by Barney (Stallone) who’s right hand men are Lee Christmas (Statham) and Ying Yang (Jet Li) who will follow Barney to the gates of hell.  The rest of the band is made up of Gunner Jensen (Lundgren), Hale Caesar (Crews) and Randy Couture.

They’ve just finished a job, and are hanging out at Tool’s (who is a former Expendable) tattoo shop awaiting the next job.  Mickey Rourke plays Tool who has limited screen time, but he’s still fun to see.  Tool gets a call, it’s an offer that he describes as “to hell and back” and Barney goes to meet his contact in a small church.  Inside the small church is Bruce Willis who dubs himself “Mr. Church” and as Barney asks him about the job, Mr. Church tells him they’re waiting for one more.  The front door swings open, and in walks Arnold.  It’s pretty sexy.  We learn that Arnold is Sly’s old partner and have contempt for one another.  I don’t really want to ruin the scene and Arnold’s cameo for you, so I’ll stop here.  All I have to say, is this scene could have been so much better.

The first half of this film is pretty slow.  We get a lot of unneeded character development, especially for Statham’s character.  We get more insight and development for Statham than we do anyone else, which I find lame – unless Stallone is planning on making a franchise and Statham will carry it on.  We learn little about Sly, other than he’s a hard-ass.  We learn that Dolph is crazy and has blood lust (what else is new?) and that Jet Li wants to make more money for his family.

This film is filled with so much absurdity and some horrible dialogue with little emotional connection – yet there is a small scene with Mickey Rourke and Stallone.  He tells Sly about a story, when he used to work with Sly, about how he watched a woman jump from a bridge and how with all the lives he’s taken, he could have saved one, but he chose not to.  It was actually very touching.

Aside from the action and the throwback cast, what really works for the film is the chemistry between the actors.  The chemistry between Rourke and Stallone is excellent, same with the three-way of Stallone, Willis and Arnold – it works so well because all these dudes are friends in real life.  Lundgren and Stallone are good on camera together, as is Statham and Li with Stallone – it all works pretty well because we know these guys had a ball making this film together.

Where this film really excelled is the fact that Stallone knows how to direct an action movie, and his skills are very well demonstrated in the final act of the film.  While Randy Couture is a little flat, and Terry Crews doesn’t have much to do, aside from shooting the most amazing fucking gun ever on screen – and Bruce Willis is underused, and Mickey Rourke just kind of hangs around – although Rourke is better in “The Expendables” than he was in “Iron Man 2” – I enjoyed Jet Li, and Statham didn’t annoy me as much in this film as he previously has.  What picks this film up is Dolph Lundgren and his hard bent attitude.  I mean, Lundgren is hot.  Seriously.

Next to Lundgren being a huge plus in the film is the fact that Eric Robert’s plays the villain of the film.  He’s a rouge CIA agent that has essentially taken over a Central American country to harvest cocaine.  Roberts has had a bumpy career, but one thing is for sure – he’s never given enough credit.  What Roberts has always been very, very good at is being over the top.  Giving performances that are over-the-top is an art form, because most of the time, they’re really bad (think Dustin Hoffman in “Confidence”).  Roberts makes being bad, look so fucking good.  Roberts is the highlight of the film.

The only question I have for Sly is: where the fuck is Kurt Russell and Carl Weathers?