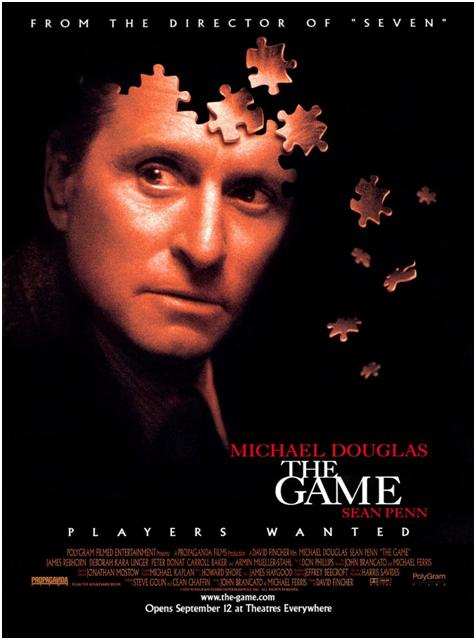 Like my father before me – I choose eternal sleep.

David Fincher couldn’t have followed his masterpiece “Seven” up any better than with “The Game”. The film follows the secluded life of Nicholas Van Orton an extremely wealthy alienated millionaire played by Michael Douglas. Nicholas’ birthday is the day the film begins; he’s 48, the same age his father was when he killed himself.

He has a lunch date with a Mr. Seymour Butts which is a joke from his brother Conrad (Sean Penn). During his lunch date with his younger and more of a free spirited brother, Conrad gives Nicholas a gift certificate to CRS (Consumer Recreational Services) and tells Nicholas to call the number because it will change his life.

Nicholas eventually contacts the service, and spends most of his day filling out a questionnaire and physical fitness tests. He finally is told what CRS is, it’s a game. It’s a very sophisticated game that is tailored for wealthy people.

Nicholas goes about his day to day life; he travels to Seattle to fire his father’s old friend Anson Baer (Armin Mueller-Stahl) because he hasn’t met his projections for the past few quarters. Nicholas tries to open his brief case to give Baer his severance package but he can’t open his brief case, it’s not his.

From this point of the film on, things begin to get skewed, events happen that are surreal – yet seem normal to everyone but Nicholas. I can’t really talk about much of the plot without ruining most of what happens in the film.

This is an excellent film directed by a master of suspense and intrigue. David Fincher is such an unbelievable talent that his films have remained to be influences to future filmmakers. I haven’t seen “The Curious Case of Benjamin Buttons” and have zero interest to see “The Social Network” – I believe that Fincher is almost selling out now. Stick with what works, stick with what you’re good at.

What adds to this film is the original score by Howard Shore is as much a major part of the film as Michael Douglas or Sean Penn. It’s a wonderfully haunting score, much like that of “Eyes Wide Shut”. The music to the film is as much of a character as Michael Douglas or Sean Penn. Fincher’s use of Jefferson Airplane’s “White Rabbit” is the best usage of music in any of his films. This is the film “Shutter Island” wanted to be.