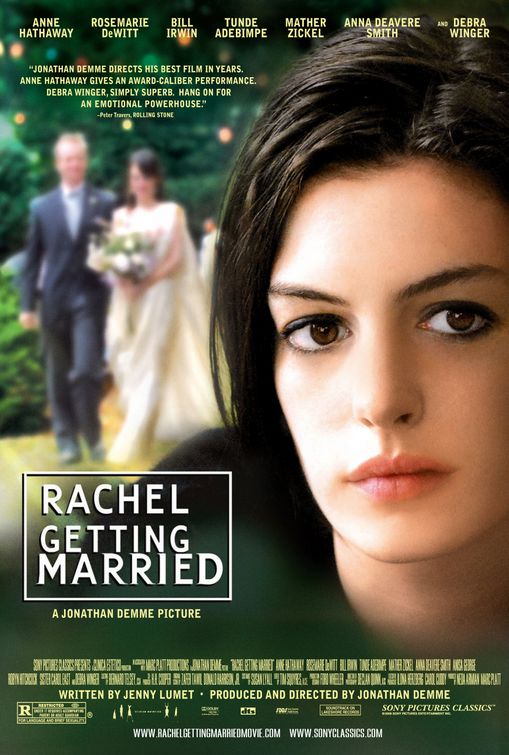 Jonothan Demme has proven once again that he is one of America’s most unique voices when it comes to cinema.  He has always been reinventing himself with each new film that emerges from his already impressive filmography (“Silence of the Lambs”, “Married to the Mob”, “Philadelphia”, “Neil Young: Heart of Gold”) as well as an Academy Award for Best Director for “Silence of the Lambs”.  He always has such a strong narrative when it comes to his films, always showing us so much, yet allowing us to keep focus on the story, as well as the characters.  The story focuses on Kym (Anne Hathaway) returning home for her sister, Rachel’s wedding from her stint in rehab.  She comes home to find herself alienated by her family, and her new brother-in-law’s family.  Kym has hurt her family so much, that it’s hard for it to be ignored, what she had done was so atrocious that it’s the unspoken truth in the house.  We’re not sure what she actually did until the middle of the film, though it is slightly touched upon prior to us knowing what had happened.

The only film I had seen Hathaway in before “Rachel” was “Brokeback Mountain”.  Her performance in “Brokeback” didn’t do a lot for me, since Heath Ledger entirely stole the film from every other actor, but I am astounded that Hathaway didn’t win the Academy Award for Best Actress (though she was nominated and lost out to Kate Winslet).  She allows herself to dig deep, show us how weak she can be yet contrasting that with giving powerful performances that I haven’t seen an actress do in quiet a long time.  What supremely adds to her performance is the way the film is shot.  The film is shot digitally with handheld cameras, giving the film a documentary style flow and feel to it.  It adds an authenticity to the film without feeling contrived.

The supporting cast is made up of recognizable character actors who you know you’ve seen before but can’t place them.  By doing this Demme adds to the documentary style feel to the film, not overshadowing Hathaway with other great actors who you know, or have placed them before.  It makes the film more real.  The only other actor who stands out is Debra Winger, who plays Kym’s mother Abby.  Winger gives yet another powerful performance as Kym’s distant mother who judges her daughter silently.  I almost feel as if Jodie Foster was the first choice for this role of the strong, older and independent woman.  Considering her direction from Demme won her an Oscar in “Silence of the Lambs” it would have been a perfect fit.  Aside from that, Winger does an exceptional job as usual.  The performance that I was most impressed with aside from Hathaway’s was that of character actor Bill Irwin.  Irwin portrays Kym’s doting and slightly overbearing father Paul.  Paul isn’t sure how to react to Kym’s arrival back home and walks on egg shells as he’s trying with all his might to moderate the tension that Kym brings back to the household.  Although this film has comedic elements to it, it’s by no means a comedy.  The story is cliche and slightly predictable, but then again – so is life.